Cultural heritage is an irreplaceable material and intangible objects and works of culture, which have artistic and property value, universal significance and aesthetics, scientific and historical impact on man.

Despite the fact that the civilization has developed, armed conflicts are inevitable today. The development of scientific and technical means has created new weapons, as it has led to the development of new methods and means of warfare. The use of weapons not only destroys the enemy’s armed forces, but also causes great damage to cultural heritage. Wars represent a big danger, causing irreversible consequences both for people and cultural heritage, which are of great importance for the mankind. Therefore, the issue of protection of cultural heritage ​​remains relevant today. The issue of protection of cultural heritage ​​is also a legal issue, because without proper legal protection their safe existence is impossible.

Nowadays, cultural heritage ​​is damaged and destroyed by armed conflicts around the world, especially the violations committed in Artsakh (also referred to as Nagorno-Karabakh) during the 44-day war (taken place in 2020). It is necessary to find out whether there are gaps in the framework of this issue, what new challenges international humanitarian law (“IHL”) faces in regulating those legal relations, and how the issue of protection of cultural heritage is regulated today.

The issue of protection of cultural heritage ​​is a universally important issue, as encroachments on them have increased in recent decades. One example is the ancient Syrian city of Aleppo, which was destroyed by terrorists, as well as six UNESCO World Heritage sites.[1]  Palmyra is one of the oldest and most luxurious cities. The Islamic State of Iraq and Syria (“ISIS”) blew up the Bel Temple in Palmyra in August 2015, and then began the systematic destruction of monuments, including the Baalshamin Temple.[2] ISIS also destroyed the triumphal arch,[3] the lion statue of Allat, the three towers, and the National Museum was looted.[4] 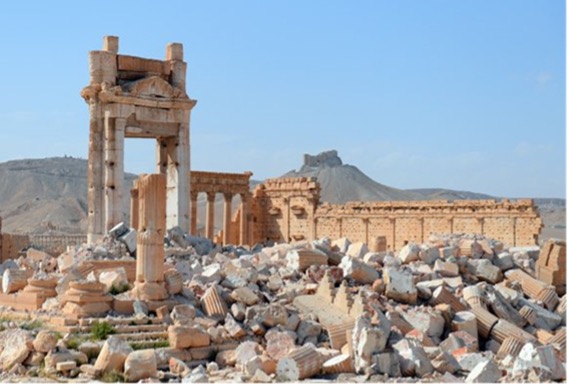 The Temple of Vaala in Palmyra 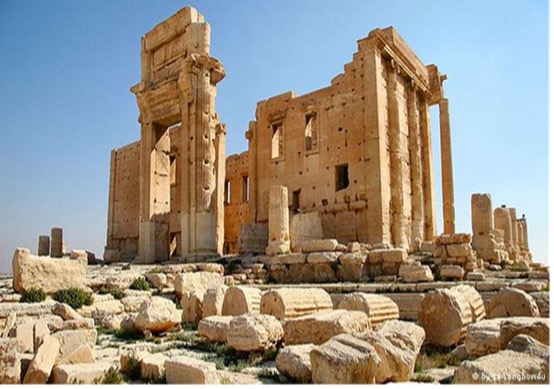 The Temple of Vaala in Palmyra

According to the rules of war, the objects of cultural heritage, such as works of art and historical and archeological monuments, must be preserved. Its destruction leads to much more serious consequences than the destruction of the monuments themselves. Our history, our dignity, everything that makes us human is under attack.

IHL obliges the parties to an armed conflict to protect and respect cultural monuments. The rules of war clearly state that the conflicting parties are prohibited from attacking cultural heritage sites, conducting hostile acts against them, or using them for military purposes. In addition, they must prevent their capture or robbery and stop vandalism.

However, cultural heritage ​​has been destroyed or damaged in armed conflicts in Egypt, Libya, Mali, Iraq, Syria, Afghanistan, and other parts of the world. The Armenian cultural heritage of Artsakh was also destroyed or damaged. Due to the military aggression against Artsakh in 2020, at least 1456 prominent immovable monuments of Armenian history and culture remained under the control of Azerbaijan, including 161 monasteries, churches, 591 khachkars, 345 tombstones and inscribed stones, 108 cemeteries and 43 fortresses.[5] Azerbaijan also controls eight state museums with 19,311 exhibits, as well as private museums in Shushi. The Armenian cultural heritage in the territories occupied by Azerbaijan is in a great danger, as Azerbaijan considers them to be Albanian, erasing the Armenian inscriptions and signs to do away with responsibility and to destroy the Armenian history. On October 8, 2020, the Ghazanchetsots Church of the Holy Savior in Shushi was shelled, as a result of which, part of the roof collapsed.[6] The cultural genocide continued even after the conflict. The Church of St. John the Baptist in Shushi (“Green Hour”) was destroyed by Azerbaijani military forces. Its dome and the bell tower were partially damaged, and then it was completely destroyed.

The Church of St. John the Baptist in Shushi (“Green Hour)

The Ghazanchetsots Church of the Holy Savior in Shushi shelled by Azerbaijani military forces. The image is taken from Panorama.am. 13.10.2020 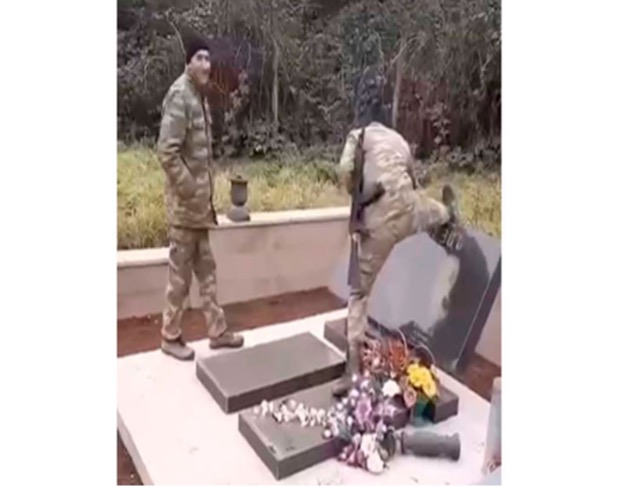 The destruction of Armenian tombstones in Hadrut by Azerbaijani soldiers. The screenshot is from a video uploaded on Tik-Tok.

At the same time, Azerbaijan has begun to falsify historical facts. In the statement by the President of Azerbaijan, Ilham Aliyev, President Aliyev stated that the 17th century Armenian church in the village of Tsakuri in the Handrut region was “Afghan” and that the Armenian inscriptions on its walls were “fake” and prepared the ground for another vandalism. It is noteworthy that the church has already been vandalized, as religious symbols have been removed.[7] The policy of deliberate dissemination of misinformation about the Armenian cultural heritage of Artsakh by Azerbaijan and the “Albanianization” of cultural monuments puts the Armenian cultural heritage in the territory of Artsakh under the threat of destruction. 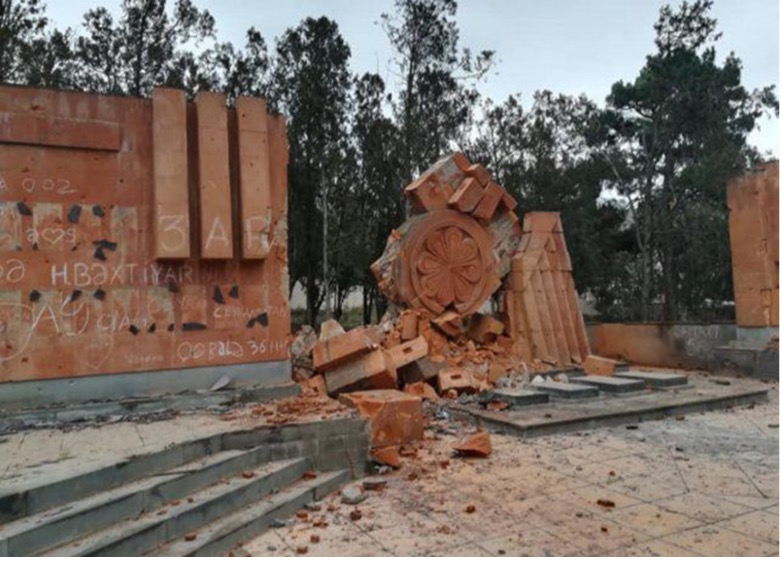 Vandalism in Talish by Azerbaijani military forces. The image is from Lurer.com. 12.03.2020. 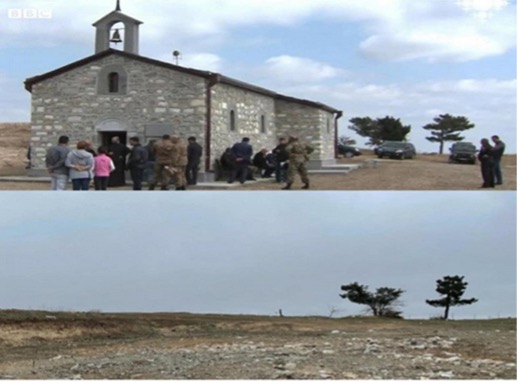 The Mighty Church of  Holy Godmother in Mekhakavan in 2017 and after the Azerbaijani occupation.[8]

The International Court of Justice (“ICJ”) in the Hague in the case of Armenia v. Azerbaijan has registered the destruction of cultural heritage, calling on Azerbaijan to “prevent, punish and vandalize” acts of desecration of Armenian cultural heritage in the territories under its control. However, the cultural genocide continues to this day and is not condemned by the international community and given a legal assessment. The fact is that neither Azerbaijan nor anyone has been held accountable for these crimes. This situation calls for decisive steps by states and international organizations to prevent the senseless destruction and looting of cultural monuments, as well as for expert discussions to effectively implement international treaties and customary international law to strengthen their protection. 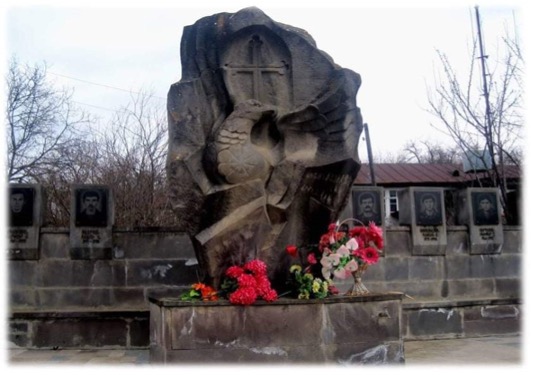 The photo is taken by Sona Mousayelyan in the village Aknaghbyur before the Azerbaijani military occupation. This was a memorial-monument donated to Armenian soldiers who took part in the first Artsakh War. 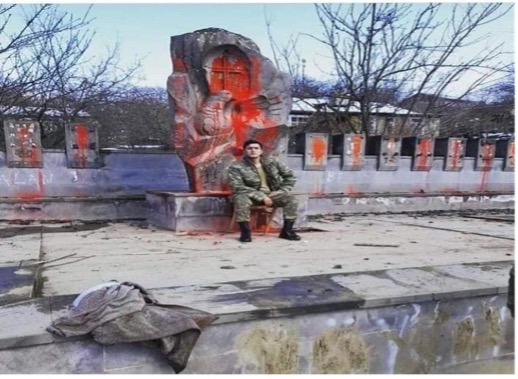 While carrying out a fact-finding mission at the Center for Truth and Justice, we were able to obtain evidence documenting Azerbaijan’s war crimes, including the desecration and destruction of Artsakh’s Armenian cultural heritage. Such desecration and destruction continue to this day. Witnesses report incidents of vandalism that they are aware of, as evidenced by photographs and videos. We are all aware that these works have a huge positive impact. We hope that the fact-finding work will continue to help Armenian lawyers to protect the interests of the Armenian state and nation in international instances.

The desecration, destruction and annihilation of cultural heritage is a crime, the perpetrators must be punished. It is necessary to clearly present, explain and demand to the international community to give an assessment not only to the cultural genocide being committed in Artsakh, but also all over the world. We live in the 21st century and historical experience shows that it is time for international law to function fully, without any political influence. Both criminals and criminal states must be punished in order to prevent such crimes.

[3] The triumphal arch was built during the Roman rule. About 2,000 years ago. Now, only photos remain of it.

[5] AH HOC PUBLIC REPORT, The Armenian cultural heritage in Artsakh (Nagorno-Karabakh):Cases of vandalism and at risk of destruction by Azerbaijan, Stepnakert 2021

[8] BBC correspondent Jonah Fisher also investigated the disappearance of the Armenian church in Mekhkakavan. The online video made by the reporter shows that church was intact when Azerbaijan took back the disputed territory.

Previous PostThe Distortion of Historical Facts at the Basis of Azerbaijan’s Anti-Armenian PolicyNext PostAzerbaijan is shelling civilian homes from north to south of Armenia proper. Civilians are taking cover in bunkers.
0Shares 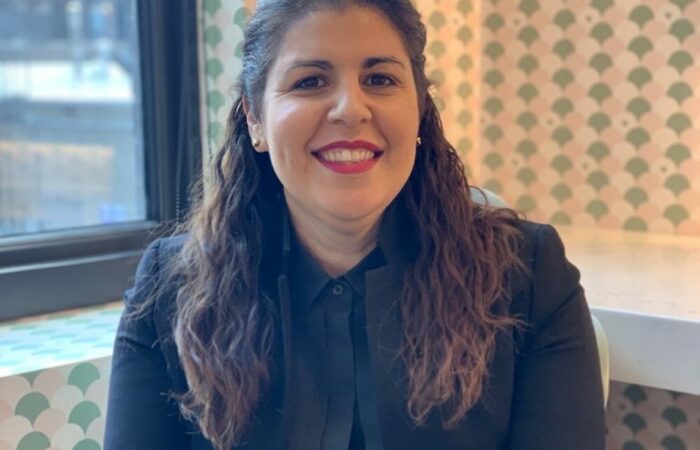 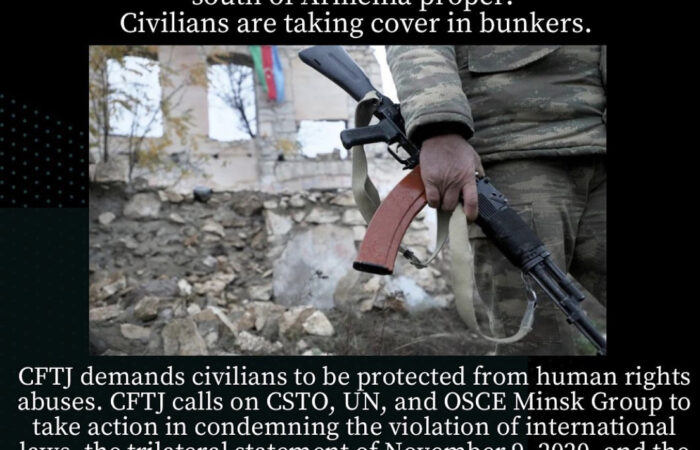