Since December 12, 2022, Azerbaijanis, referring to themselves as “eco-activists” and backed by the government of Azerbaijan, blockaded the Lachin Corridor, the only road connecting Nagorno-Karabakh to Armenia. The Lachin Corridor is Nagorno-Karabakh’s only transportation corridor that provides food, medicine and supplies to the Armenian population. Due to this ongoing blockade, the 120,000 Armenians of Nagorno-Karabakh are once again the target of Azerbaijani aggression. Azerbaijan had also cut gas to Nagorno-Karabakh, as temperatures hover around 30 degrees Celsius, with snow on the ground. The blockade has been in effect for nine (9) days. The humanitarian crisis is looming. Unless Azerbaijan immediately opens the Lachin Corridor, serious and permanent harm will occur to 120,000 Armenians who will face freezing temperatures without heat or hot water. They will not have access to an adequate food supply, medicines and medical care until the corridor is open.

The Consequences of the Blockade

The Center for Truth and Justice (“CFTJ”) has collected testimonial evidence from residents of Nagorno-Karabakh who have stated:

With even colder temperatures expected, this will soon unravel into a humanitarian calamity.

Azerbaijan has denied its involvement in the blockade but this false narrative is not supported by the facts. The international community including the U.S., UK, France and all members of the UN Security Council today called on the government of Azerbaijan to lift their blockade and open the Lachin Corridor to free flow of movement. The recorded 9228th meeting of the UN Security Council regarding Azerbaijan’s blockade of the Lachin Corridor can be found here: https://media.un.org/en/asset/k1o/k1o8d80kaj.

Grave Consequences of the Blockade

According to the witness accounts and evidence gathered by CFTJ, the residents of Nagorno-Karabakh are facing severe food shortages and inadequate medical care due to the ongoing blockade orchestrated by the government of Azerbaijan. The blockade is affecting all residents of Nagorno-Karabakh, including vulnerable populations such as children, people with disabilities, as well as the chronically sick, hospitalized and those in critical condition. These are all violations of customary international law as well as the Geneva Convention. As the crisis continues, the supply of essential goods in the region is rapidly approaching its complete depletion. CFTJ urges the international community to demand an end to the blockade, which it views as an attack on the civilian population of Nagorno-Karabakh with the aim of ethnically cleansing them from their homelands.

Center for Truth and Justice is a human rights organization that gathers testimonial evidence from victims and witnesses in conflict and war zones in an effort to amplify their voices. The evidence-gathering methodology CFTJ uses can be found here: https://www.cftjustice.org/investigations-methodology/. 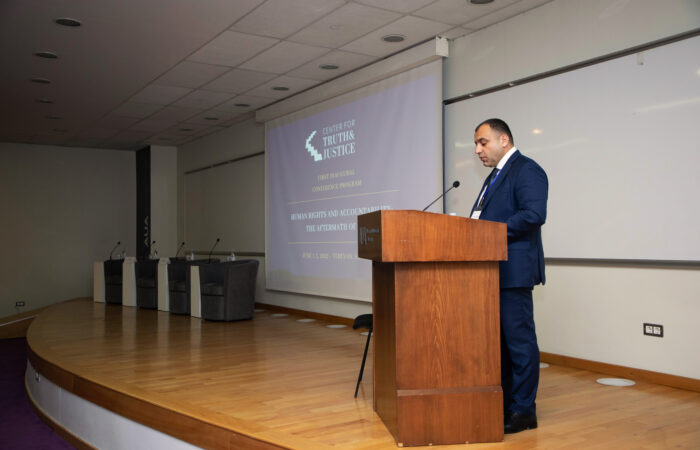